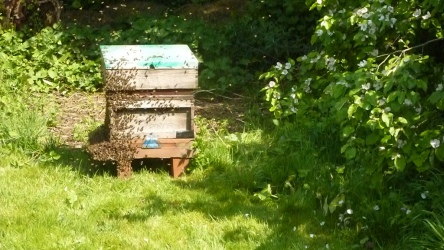 Heavy lobbying has started from Teenage Son to add to the household.  “Bees”, he declared recently on a trip home, “we ought to get some bees”.

We already have a dog, three cats, four chickens and a couple of turtles.  I have always been a sucker for taking in waifs and strays and if anyone finds an abandoned animal (which happens all too often) I am first on everyone’s list to call.   Someone even chucked a three legged hamster over our garden hedge, probably thinking I would take it in (I did).  I finally realised things were getting out of hand when the Environment Agency called and told me that I had 6 microchipped dogs and cats, instead of the legal maximum of five and would therefore need to register myself as a small zoological garden (I know, it’s completely crazy but the spanish are a bit neurotic about domestic pets).   Luckily I realised that one of my elderly cats had died a couple of months before and her microchip had not been cancelled so I was able to wriggle out of that crisis.

Our turtles live in our pond all year round come sun or ice.  In summer they can often be seen basking on the rocks with the frogs.  We started with one which had been purchased as a pet when the children were small.  One day Daughter decided that “Turtley” should be set free and lobbed him into the pond.  I tried fruitlessly to catch him but  he was perfectly content hanging out with the fish and  hiding under the weed and so I left him to it.  Shortly afterwards, a mother from school turned up unannounced, clutching a small box with another turtle inside. She had heard about The Great Turtle Escape at school and after greeting me, she showed her two small sons the pond.  “Jaime will spend the summer here while we are on holiday” she said to them, and before I could stop her she had liberated Jaime.  “You probably won’t be able to get him back”,  I whispered doubtfully to her.  “I know” she whispered back smiling, “that is the whole idea!”.

The chickens (again a suggestion from Teenage Son) have been a huge success and we love collecting the fresh eggs every morning and seeing them scratching around the garden.  But  the flip side of keeping and caring for all theses creatures is that I seem to spend all my time sitting in the vet’s waiting room (he is heading for early retirement on our pet’s ailments alone)  or buying and carrying enormous bags of  feed for all the different species.  Bearing that in mind, I have to admit that the idea of keeping bees is very appealing.  No feeding or vet visits, in fact minimal effort.   I can just see myself dressed in white with a broad brimmed, netted hat, clutching a smoke puffer.   And to make the idea even more appetising, Teenage Daughter is taking a beekeeping course at school and has already brought home some outrageously delicious honey.

There are a couple of hurdles to overcome.  All our neighbours fumigate their gardens to kill greenfly and other perceived garden pests  annually.  Unfortunately this exterminates all the good bugs as well.  I am worried that this could conceivably wipe out our hive so I may have to install locking doors to shut our bees in on fumigation day.  It is also quite likely that I will  need to take out an insurance policy for civil liability incase the colony decides to up sticks and relocate to my least tolerant neighbour’s attic space.  That said, the draw of having our own honey and  the thought of helping the dwindling bee population makes it a very exciting idea.  I will start reading Beekeeping for Dummies forthwith.

3 thoughts on “New additions to the Zoo?”