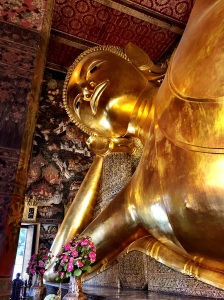 We landed in Bangkok after a fairly uneventful flight apart from endless hours of turbulence. Husband as usual slept through it all, snoring delicately while I clutched the armrests and whimpered whenever we hit a particularly vicious air pocket.

We breezed through immigration and baggage reclaim and were whisked to our hotel in an airconditioned van, weaving in and out of the gaudily coloured tuk tuks and shocking pink taxis until we arrived at the Hotel Siam right on the Chao Phraya river.  Stepping outside is exactly like stepping into a steam room fully clothed. I thought Madrid was hot in July, but it has nothing on Bangkok in May!  Luckily our hotel was fully air conditioned and after Husband had gone to the gym and I had accidentally fallen asleep while checking my emails, we jumped on the hotel’s boat to take us to dinner.

The restaurant had the rather unprepossessing name of Steve’s Bar but had been recommended as a good local Thai eatery.  Husband’s head began to loll as we sped up the river, inspite of  the amazing view  and my sharp intakes of breath due to a few near misses with small ferries and a couple of enormous barges. Steve’s Bar turned out to be a rickety shack on the river bank and after clambering off the boat, we left our shoes outside the door with thirty other pairs and sat down to some outrageously good pad thai and even some wine.

The next morning we were picked up by our smiling guide Ta, who made sure that we were correctly dressed for visiting the temples with covered shoulders and over the knee dresses for the women. Luckily you can rent a sarong if you only have shorts.

We began the day at Wat Pho and after buying our tickets crept into one of the temples where sixteen monks were chanting. They sat to one side on a slightly raised area facing the stunning golden Buddha.  The complex of Wat Pho was delightfully empty and it was easy to appreciate its extraordinary beauty. Around every corner is a gallery of golden Buddhas or an exquisite statue or temple. Gold leaf is used everywhere and the level and intricacy of the decoration is astounding.

Our next stop was the Grand Palace but in contrast to Wat Pho it was heaving with people. The majority were groups of chinese who were clutching a forest of umbrellas against the sun and selfie sticks.  Ta squared her shoulders and warning us of the danger to our eyes from the umbrella spokes, forged a path through the masses, batting at the odd aggressively wielded umbella or obtrusive selfie stick.  She even told off a young american woman who had bared her shoulders.  “But it’s sooo hot!” complained the tourist, to which Ta replied “Yes, well we are all hot. Cover up!”.  Once we got used to the crowds, the Grand Palace was no less beautiful and we enjoyed Ta’s tales of the various kings who had built it and the mythical creatures that are depicted on the walls.  Our visit to the Emerald Buddha was greatly enhanced by the spectacle of the diminutive doorman smacking a tall american man on the bottom with his sign for inadvertently sitting on a donation box.

Leaving the Grand Palace, we walked in the punishing heat through a bustling market to the river and jumped into our own long-tail boat for a trip along the Klong which is a canal that becomes quieter and more peaceful the further along you go. We passed small floating markets with women cooking and selling food from their tiny boats to the local people doing their shopping. Then as the canal became narrower, we saw ramshackle  wooden houses on stilts often leaning precariously over the water while their inhabitants went about the daily business of cooking or washing.  At one point an enormous monitor lizard sat on a wall sunning itself as we chugged past.

We just had time to visit Wat Arun with its marvellous spires covered in chinese porcelain and rows of chinese lions.  Ta then took us back to the river where we caught a ferry to the opposite bank and made our way to a restaurant.

Lunch consisted of a delicious green curry in an air conditioned restaurant back on the bank of the main river which felt like the height of luxury after the gruelling  heat outside. We had time to properly cool down and rehydrate before we said goodbye to Bangkok and Ta took us to the airport for our onward flight to the next part of our trip, Siem Reap in Cambodia.