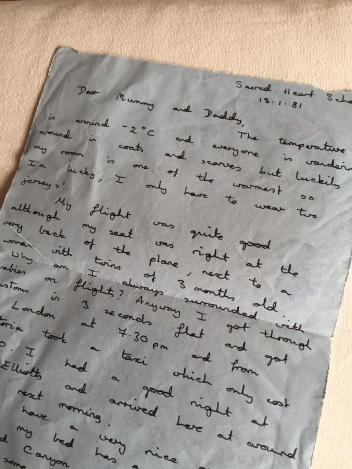 Over half term, Teenage Son decided to dig out my old SLR camera to marvel at the fact that it needed film and you had to wait to have the pictures developed.  He had been rummaging around in my desk for about ten minutes when he shouted downstairs saying   “Come quickly. You have to see this!”.  Naturally I was concerned that he had found something embarrassing in amongst my papers, and so I hurtled up the two flights of stairs ready to wrestle away from him whatever incriminating photo or letter he was clutching.  But as I bent double on the landing, getting my breath back, he shoved an old file under my nose.  “Have you seen this?” he asked.  Looking at it, I realised it was a file that my mother had given me a couple of years ago when she was clearing out her house.

I had obviously been distracted at the time and had put it straight into my desk without opening it.  Inside were a stack of drawings and paintings I had done as a child along with press cuttings of a competition I had won, a few swimming certificates and some letters and envelopes.   Teenage Son and I sat down together and went through them all, laughing at my early attempts to draw various animals and marvelling at some old American Jack and Jill comics from the 1930’s that my mother had kept from her own childhood.

Eventually we came to a bundle of airmail letters written by me to my parents over the years that I was at boarding school.  We read through them all,  wading through tales of unfair detentions, midnight feasts, dormitory floods and as I got older, trips to London and dances.  There was one particular letter which he particularly enjoyed which began,

” After two years of trying, we finally managed to break into the food storeroom and filled two pillowcases with pots of peanut butter, Wagon Wheels and mini cheesecakes.  There should be enough to last until the end of term.”

Teenage Son was fascinated to hear my own teenage voice coming through in the letters and more worryingly for me, to see that his mother was not the angelic teenager she often makes herself out to be.  It made me realise that so much of our communication with him and Teenage Daughter, while they are away at school, is done through Whatsapp, Skype and telephone calls.  Thirty five years ago the first two methods didn’t even exist and trying to ring Madeira where my parents were living, involved booking a reverse charge call 24 hours in advance from the school phone box. No easy feat.  So we would write letters which would take up to two weeks to arrive and whatever news they contained was old.  But they could be kept and reread by torchlight after lights out.   These letters have given my children the chance to see a little piece of my past and to read about the things that I was interested in, what my worries were, who my friends were and what my day to day life was like.  The trouble with Whatsapp and Skype is that while they are wonderful for keeping closely in touch, helping with homesickness and dealing with dramas, they cannot be kept in the same way that letters can.

After reading through all the letters, Teenage Son declared that he wanted to start writing to us from school and has asked us to write back, not just for the excitement of receiving a letter at breakfast but to keep them.  That way, some of the scrapes, mischief and dramas of his time at school can be recorded for his own children in the future and to jog his memory about old friends and teachers, as the battered old airmail letters he discovered in my desk have jogged mine.